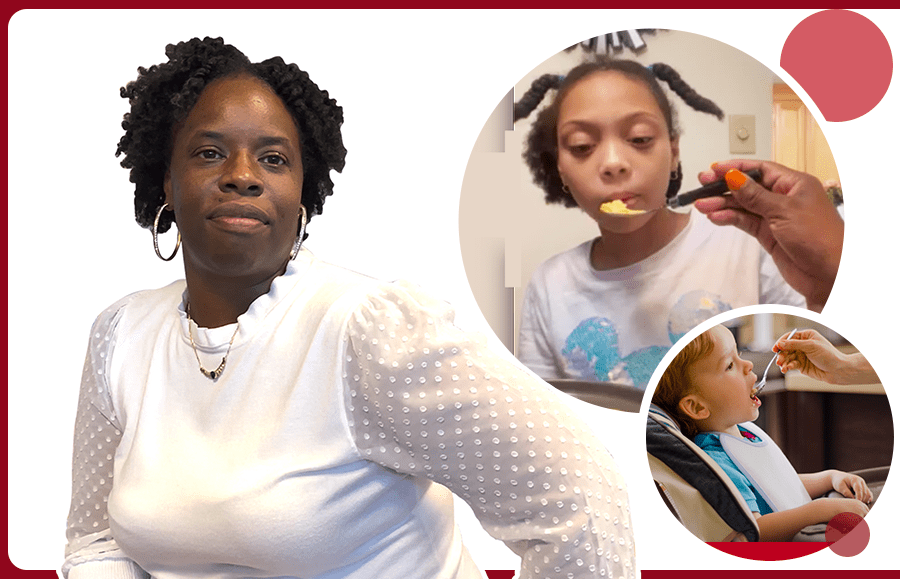 Parent’s Guide to Feeding Behavior in Children with Autism

When it comes to trying to feed a child with autism who is a picky eater and transitioning from pureed foods or a bottle, it can be difficult and frustrating (for both the parent and the child) to make that happen.

Now, I would not call myself a feeding therapist. However, with my experience as a Registered Behavior Technician for over 10yrs, I have had the opportunity to attend many seminars, trainings, and workshops led by some of the top feeding therapists around. I have learned some really good techniques which I use on my clients who are all on the spectrum, and I have a very high success rate. Majority of the clients I provide ABA services to tend to have feeding issues. The clients I am speaking of DO NOT have any problems with chewing or swallowing. I only do this for children who do not want to accept new foods.

There are quite a few techniques, but the two I use regularly are: Rewards and Planned Ignoring. They go hand in hand.

Rewards are exactly what it sounds like. In the beginning, I reward them for every little thing they do that pertains to only trying the food. That could be just picking up the fork or spoon. Or, just for opening their mouth and acting like they are going to try it (even if they close it back without any of the food going in). Just for sitting at the table. I mean every little thing! I do this because the more they see that they are doing a good thing, they usually begin to feel comfortable with me. Eventually, they trust me and finally open up and allow me to put the food in their mouths. When I put the food in, I do it quickly and put a small amount (this is done to avoid overwhelming them.) I put just enough for them to be able to taste it. The rewards I usually use are their favorite toy or my personal favorite—exaggerated praise!! That consists of tickles, high fives, screams of excitement, etc.

When I do Planned Ignoring, that is when the child is probably having a tantrum (more than likely, to get out of the feeding,) I do not entertain the meltdown. I keep the child at the table, confirming they are safe, and let them cry and scream. They may even act like they are gagging, if you can even get it in their mouth, just to make you stop trying to feed them. They are clever on how to get out of something they do not want to do. I know the child is in no harm, so I ignore it. I keep the fork, spoon, or my hands with the food in the child’s face. Yes, sometimes I need to get the food in their mouth. A Fork or Spoon will not do the job.

Side note: sometimes, the utensil itself is scary to them. It may be better to just use your hands…of course, you must use your better judgment at that moment.

And, of course, when they eventually stop and or just allow me to get the food in their mouth, I will reward them.

As you can see in the video, the child is not having a meltdown, but she is trying hard to avoid the food. It is also a great idea to pair the new food with something they currently eat. In this case, the child enjoys chicken nuggets. I paired it with that. I also chose to give her control of the spoon, even though I still held on to it. Giving her control allowed her to do it on her terms so to speak. She was able to smell the food which also gave her a chance to explore what she was about to eat. I did not want to overwhelm her with too much food on her fork, so that is why I took some off. When I took some off, she was willing to try more. I did not reward her for every try because we had been working together for quite a while. I knew she would eventually try it. I did give her praise with hand claps and tickles which she loves, and I gave her an Oreo, which is her favorite snack. Even if she did not finish the food, I would have still given her the rewards just for trying.

Feeding can be very challenging, frustrating, and time-consuming. You as a parent may also want to have a meltdown but please hang in there. These behaviors do not usually last long. Again, your child has developed an ability to get out of things they do not want to do by having meltdowns. As soon as you can learn to ignore those meltdowns, you will begin to gain more control over your child and get them to do the things you want them to do. Believe it or not, crying is okay, as long as they are not in pain or danger. Allow yourself a great deal of time when trying new foods. You could even allow the child to explore the food by letting them touch and play with their food.

Please be patient and do not give up. You can get through this!

We use cookies on our website to give you the most relevant experience by remembering your preferences and repeat visits. By clicking “Accept All”, you consent to the use of ALL the cookies. However, you may visit "Cookie Settings" to provide a controlled consent.
Cookie SettingsAccept AllReject All
Manage consent

This website uses cookies to improve your experience while you navigate through the website. Out of these, the cookies that are categorized as necessary are stored on your browser as they are essential for the working of basic functionalities of the website. We also use third-party cookies that help us analyze and understand how you use this website. These cookies will be stored in your browser only with your consent. You also have the option to opt-out of these cookies. But opting out of some of these cookies may affect your browsing experience.
Necessary Always Enabled
Necessary cookies are absolutely essential for the website to function properly. These cookies ensure basic functionalities and security features of the website, anonymously.
Functional
Functional cookies help to perform certain functionalities like sharing the content of the website on social media platforms, collect feedbacks, and other third-party features.
Performance
Performance cookies are used to understand and analyze the key performance indexes of the website which helps in delivering a better user experience for the visitors.
Analytics
Analytical cookies are used to understand how visitors interact with the website. These cookies help provide information on metrics the number of visitors, bounce rate, traffic source, etc.
Advertisement
Advertisement cookies are used to provide visitors with relevant ads and marketing campaigns. These cookies track visitors across websites and collect information to provide customized ads.
Others
Other uncategorized cookies are those that are being analyzed and have not been classified into a category as yet.
SAVE & ACCEPT
EN
EL EN